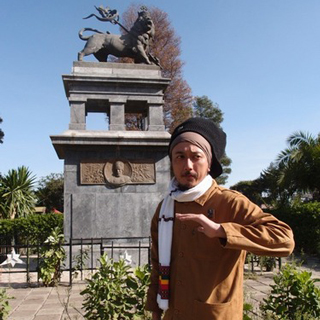 With the release of 2007’s “Reggae Ambassador”, Ras Muhamad is breaking new frontier by premiering & introducing the 1st Dancehall Reggae sound to the Southeast Asian market.
and now the 2nd album has born and ready to lead you to somewhere that more Roots & culture, the new one and fresh from the oven, bring a lot of experiences for the youth. 2009's "NEXT CHAPTER more Roots & Culture, Bring Local to Global.
Hailing from Indonesia, Ras Muhamad is a representative & an ambassador for his country’s Reggae music. It is one of his mission to accomplish & establish an international relationhip between Reggae artists worlwide… from Jamaica to Indonesia.
With a strong musical background & knowledge that he learned during his decade-long stay in New York City, “the Ras” wants Indonesian music…specifically its urban music to be exposed to its neighboring countries & be equally respected by the western hemisphere.
Pushing the Indonesian Urban Sound light years ahead, Ras Muhamad is accompanied by HipHop Produceer WIZ, for its Grand sound & Wizardry in the mixing board & productions.

Now, Ras Muhamad is a producer and also a host for Jamaican Sound program in local radio: Mustang 88 FM. He's running the show every Tuesday at 7 - 8pm. on progress become 2 hours jamming-tune. STAY TUNE! Every session is a lessons. Full Jamaican music for all humanity.