Brand new version from legendary reggae artist Don Carlos. "Gimme Your Love" will be released on iTunes and digital stores by Don Carlos Music. Expected Release: Apr 21, 2015. Check it out! 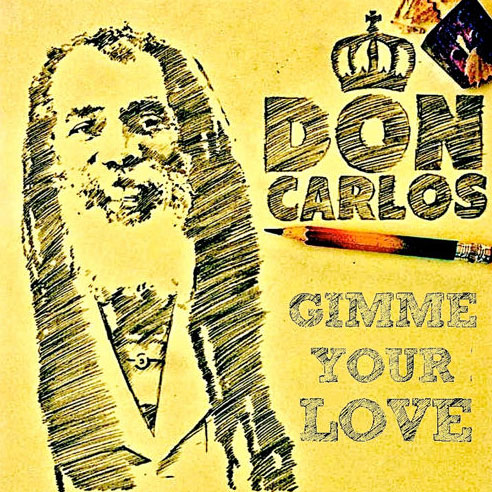 Don Carlos (born Euvin Spencer), Legendary Reggae Artist - Born and raised in one of the most deprived regions of Western Kingston, Jamaica. A district notoriously known as Waterhouse, which incidentally is also the musical spawning ground for many of Reggae's greatest ever talents, such as King Tubby, Black Uhuru, The Jays, Junior Reid, and King Jammy, to name a few.
Don Carlos started his singing career in 1965 in conjunction with other artists and quickly moved on to creating solo singles. In 1972, Don moved into a trio as one of the original contributors of Black Uhuru, alongside other founding members, Garth Dennis who later went on to joining the Wailing Souls, and Derrick Ducky Simpson. Two years after the trio's groundbreaking debut, the group split in different directions and Don continued to pursue a solo career.
Within three years, developing his song writing and grooming his distinctive vocal style, Suffering was released in May 1981. This strong release took the industry by storm, courtesy of a heavy roots and culture flavored showcase for the Negus Roots label. This album was a massive hit in Africa, selling in unprecedented numbers.
At this time, he worked alongside Gold, his co-writer, and back up vocalist. Together, they brought through such timeless creations as Harvest Time, Day to Day Living, Them Never Know A Natty Dread Have Credentials, between 1980 to 1984. Don continued on with more releases including Laser Beam, Raving Tonight, Never Run Away, Just A Passing Glance, Ghetto Living, and Deeply Concerned.

During the eighties, Don was a popular artist in the Dance Hall scene with numerous top ten hits between 1982 - 1985, such as: Late Night Blues, Nice Time Tonight, Dice Cup, Hog & Goat, I'm Not Getting Crazy, Fight Fight Fight, Traveling, Laser Beam, Johnny Big Mouth and Spread Out. Don is still churning out solid, melodic roots reggae. Other titles in his rich catalogue include Roots and Culture, Pure Gold, Spread Out, Plantation, Slow Down Vol.3, Prophecy, Firehouse Clash, Ras Portraits, Head to Head, Jah Light, Live in San Francisco (2002), and Special Edition to name a few.
There's an old saying in the music industry that claims: What goes around, comes back around. In Don's case, a request from Duckie for Don to continue his former role as lead vocalist in a rejuvenated Black Uhuru reunion resulted in another strong Black Uhuru album - Now. 1989 marked the reunion of the original vocal trio with Don, Garth and Duckie. After six years- 1989-1994 - and four albums, singing lead for Black Uhuru in the studio, and on the road, Don again went back to his solo career. His other titles with Black Uhuru include Mystical Truths, Iron Storm and Strong. All of these four albums are classics with Don up front on lead vocals. In addition, each of four titles were nominated for Grammy Awards.
After the Black Uhuru reunion, Don continued to show his inspiration thorugh his albums Changes, Ease Up, Seven Days A Week, Groove Wtih Me and Live in San Francisco. During this time Don kept on touring and in the new millennium he joined forces with the California based Reggae Angels for four years. He continues to tour the world successfully with his band, DUB VISION.