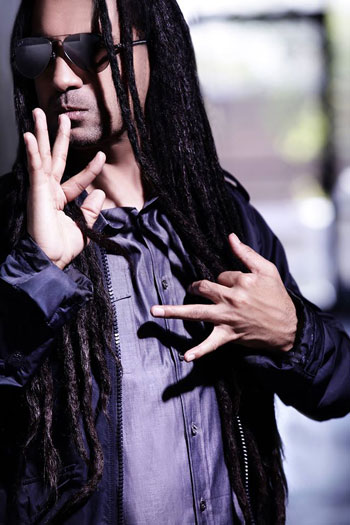 You will remember the big hits from the 90’s such as “Chokthere, Arranged Marriage & Boomshackalak”. !!!

Apache Indian was born and raised in Birmingham, England, a working class city with a large immigrant population, especially of Jamaican and Indian origin.

Birmingham is also famous as an epicenter of the UK Reggae scene, and it was there that bands like UB40, Steel Pulse, and Musical Youth first got their break. Apache Indian cherished his Indian heritage and his music reflects the influence of styles like Bhangra and Bollywood film music, but it was Reggae and Dancehall that truly fascinated him.

Apache became a part of the vibrant 'sound system' culture in his hometown of Handsworth, giving him the opportunity to be able to show off and develop his unique lyrical styles in front of local crowds. In 1989 Apache went on to release his first song on his own record label, which went on to hold the number one spot in both Reggae and Bhangra charts nationally. After achieving a further two number ones, Apache went on to sign a major recording deal with Island Records who released his debut album 'No Reservations' in 1992. Apache quickly catapulted to trend-setting a fusion of Reggae, Raggamuffin, Hip Hop and Bhangra that exploded globally thus creating a new market for the music world to explore.

Apache Indian is a Legend in his filed and is recognized as the first true Asian International Mainstream Artist! He is still the only Indian music artist to have ever achieved 7 top forty hits in the National UK charts! He was the first Indian DJ on National Radio 1, had 4 Brit Award Nominations, and presented his own show on MTV from Jamaica & for Channel 4 from India. The list of ground breaking achievements & numerous Industry Awards goes on & takes Apache all the way to Hollywood where his songs have been featured in 8 Blockbuster movies including Dumb & Dumber and Scooby Doo2!

Apache’s songs have also been featured in over 75 International TV commercials. Apache has collaborated with some of the big names from the music scene such as Maxi Priest, Shaggy, Pras from the Fugees, Boy George, Luciano, Malkit Singh, Bappi Lahri, Desmond Dekker, Yami Bolo, Tim Dogg & many more! Apache has continued to tour the world throughout his 18 year career & is one of the few Indian artists that regularly perform to Asian & International audiences.

British vocalist Apache Indian performs a highly eclectic form of Reggae informed by the Bhangra style of his East Indian heritage. After cutting his teeth toasting in U.K. dancehalls, Apache Indian began to release singles in the early '90s and achieved three number 1’s in both the Reggae and Asian charts! Many of these singles would appear on his 1993 major-label Island Records debut, ‘No Reservations’, including "Don Rajah", a song that exemplifies Apache Indian's cross-cultural fusion & earned him a new nickname as well. By the mid-'90s, Ragga production often included elements of hip-hop, and Apache Indian's next record was no exception. Featuring guest appearances from Jamaican Reggae stars Sly and Robbie, Frankie Paul, Yami Bolo, & American MC Tim Dog, 1995's ‘Make Way for the Indian’ included sampled tabla beats & spawned a U.S. club hit with the shuffling R&B of 'Boomshackalak'. The "Don Raja" of British Ragga began to increase his International exposure by touring the world 5 times over 20 years, performing massive sold out concerns across India & Asia, Europe, Canada & America! Apache performed at Reggae Japansplash in '94 and '95 & has appeared in 4 Bollywood films! He continued to record as well, releasing albums titled, 'Real People' in 1998, 'Karma' in 2001, 'Time for Change' and 'Sadhu 'The Movement' in 2006/7 as well as various collaborations. Apache Indian performed at all the major World Music, Reggae & Asian festivals in 2006/7 with his live band 'The Reggae Revolution' from Birmingham including headlining WOMAD in Reading! Apache has enjoyed 20 years of success including; winning various awards from the Asian & Reggae Industries, 7 British top 40 hits, 4 Brit Award nominations, Mercury Music nomination, Ivor Norvello Award & the International Dance Award in 1995.

His big hit single Boomshackalak has been featured in over 75 International TV commercials as well as 7 Hollywood films including 'Dumb & Dumber' & 'Scooby Doo 2'! Apache Indian was the first Asian artist to have his very own show on Radio 1 where he interviewed some major artists from the Reggae & Asian music industries & also had live sessions where he encouraged & supported local bands! Apache also presented a one-off special show from India for Radio 1 called 'Karma Confusion' which won a CRE Award in 1998! Apache Indian presented 'MTV Reggae Sound System' from Kingston, Jamaica, 'Apache Goes Indian' for Channel 4 from India & 'Soul Music' for Charlton TV in the Midlands! Apache Indian has sold 11 million albums to date and is now regarded as a Legend in his field. He is still very active in his music career & also acts as a consultant for various artists and record labels. Apache has continued supporting charities & local community projects across the globe...

You will remember the big hits from the 90’s such as “Chokthere, Arranged Marriage & Boomshackalak”. You may even remember that Apache recorded a song with AR Rehman called ‘No Problem & was featured in a Tamil movie called ‘Love Birds’ with Prabhu Deva. Apache also collaborated with Asha Bhosle on a song called ‘Yeh ladka’ that was featured on Ashaji’s album entitled ‘Rahul & I’. I am sure you remember Apache’s big collaboration with Jazzy B, ‘Dil Lutiya’ that took the world by storm!

After another successful year of touring around the globe, and performing in over 25 countries last year with his live band ....... he is now coming to India.