Happy Halloween! On "Black Ark Vampires" Lee "Scratch" Perry & Subatomic Sound System have crafted a throbbing sound-man tune propelled by subsonic bass, bubbling skanks, and pulsing beats that balance the murky and mystical vibes of Perry’s classic Jamaican dub reggae recordings with the flammable energy and bass vibrations of current electronic music, fine tuning a recipe that they have slow cooked throughout their last four years of U.S. tours spreading authentic dub to a new generation in places like Coachella, Dub Champions Festival, and Red Bull Music Academy. Lyrically the track features Perry’s most focused lyrics in a decade, a poignant oath of vengeance against the vampires that corrupted the ark of the covenant and forced him to burn down his famed Black Ark studio, told in comical rhymes that echo the cadence of a Dr. Seuss story coupled with the morbidity of Edgar Allan Poe, promising the details of where, when, and how he will kill these vampires, from Kingston to London to New York City and everywhere; vampires beware; he will kill them with his hair, with fire, with electric wire, and even with roast corn. Melodically the tune packs soaring vampire hooks, spiritual vocal choirs, groaning melodica bursts, and even a few lines from dancehall vocalist Jahdan Blakkamoore, produced and recorded by Emch at his Subatomic Sound laboratory in NYC. Scratch’s vocals were recorded in Brooklyn at the Hook Studio after an NYC performance with the production assistance of On-U Sound’s legendary Adrian Sherwood, producer of some of Perry’s finest post-Jamaica recordings. The session was filmed by a Dubspot video crew after a long drive through NYC during which Perry recounted the better part of his life story as a warm up for the session. 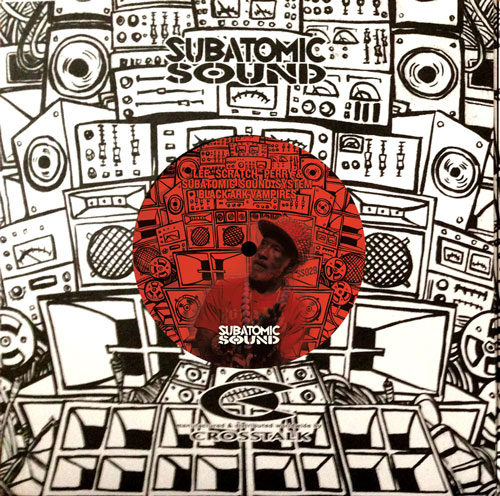 At the age of 78, Lee "Scratch" Perry has built a life based as much on his fame as a reggae and dub inventor who exhibited boundless creativity and innovation in music composition and production, as he has on his reputation as a madman with playful wit, a propensity for lighting things on fire, a natural mystical spirituality that he famously introduced to Bob Marley, and his defiant individuality and commitment to personal freedom. "Black Ark Vampires" brilliantly ties together these divergent characteristics to create classic Lee "Scratch" Perry material on all levels.

Perry loves to dance and loves dancehall. His nickname actually comes from the name of dance he invented called Chicken Scratch. During his tours with Subatomic Sound System, Scratch had a voracious appetite for hearing new sounds and was interested in the "Vampires & Informers" dubstep track Subatomic Sound System had produced for dancehall vocalist Elephant Man. Perry began performing on the riddim live which led to developing the lyrics for Black Ark Vampires and Subatomic developing a riddim for Perry that captured his vibes. Though Perry is known for seldom giving straight answers and many have wondered if he really burned down the Black Ark studio, Emch from Subatomic Sound System says that one night after performing a show in California, he and percussionist Larry McDonald, a Black Ark studio veteran, were talking backstage when Scratch told them the reasons for his own longevity: "Stress will kill you. That’s why I had to burn down the Black Ark." He said the popularity of the studio had attracted the vampires who came to suck him dry and corrupted the magic of Black Ark, but rather than let that slowly destroy him like a cancer, he chose to close the book on that chapter of his life and move on by torching the studio and making an exodus to the UK leaving the vampires with nothing but the ashes.

THE SUBATOMIC SOUND LABEL: Subatomic Sound specializes in limited edition exclusive vinyl releases that push the envelope of dub, reggae, & dancehall in the context of electronic bass music through forward sounding productions and unlikely collaborations with icons such as Lee "Scratch" Perry, David Lynch, Anthony B, Elephant Man, Ari Up of The Slits, as well as new school torchbearers like Dubblestandart, Jahdan Blakkamoore, Dub Gabriel, and many more. Subatomic Sound actively produces events and founded the annual Dub Champions Festival running 4 years in the USA and Europe. Subatomic Sound Radio airs on Brooklyn Radio and for three years ran on KEXP’s Radio New York, 91.5FM broadcast which transmitted to a footprint of 11 million listeners. 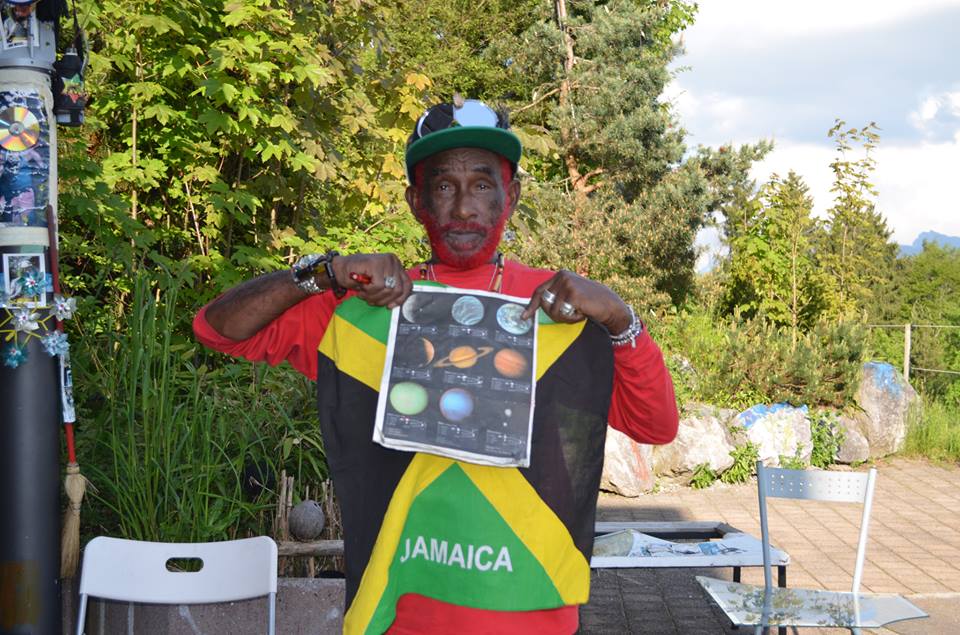 "I’m an artist, a musician, a magician, a writer, a singer; I’m everything. My name is Lee from the African jungle, originally from West Africa. I’m a man from somewhere else, but my origin is from Africa, straight to Jamaica through reincarnation; reborn in Jamaica..." .. .. Lee "Scratch" Perry (born Rainford Hugh Perry, on March 20, 1936, in Kendal, Jamaica) is a Grammy award-winning reggae and dub artist, who has been highly influential in the development and acceptance of reggae and dub music in Jamaica and overseas. He employs numerous pseudonyms, such as "Pipecock Jaxxon" and "The Upsetter". Arguably the first creatively driven, "artist-producer" in modern recorded music, Lee "Scratch" Perry occupies the highest level of music making - standing comfortably next to pioneers like George Martin, Phil Spector, and Brian Wilson. .. .. Perry's musical career began in the late 1950s as a record seller for Clement Coxsone Dodd's sound system. As his sometimes turbulent relationship with Dodd developed, he found himself performing a variety of important tasks at Dodd's Studio One hit factory, going on to record nearly 30 songs for the label. Disagreements between the pair due to personality and financial conflicts, a recurring theme throughout Perry's career, led him to leave the studio and seek new musical outlets. He soon found a new home at Joe Gibbs's Wirl records. .. .. Working with Joe Gibbs, Perry continued his recording career, but once again, financial problems caused conflict. Perry broke ranks with Gibbs and formed his own label, Upsetter, in 1968. His first single "People Funny Boy", which was an insult directed at Gibbs, sold very well. It is notable for its innovative use of a sample (a crying baby) as well as a fast, chugging beat that would soon become identifiable as "reggae" (the new sound did not really have a name at this time). From 1968 until 1972 he worked with his studio band The Upsetters. During the 1970s, Perry released numerous recordings on a variety of record labels that he controlled, and many of his songs were popular in both Jamaica and the UK. He soon became known for his innovative production techniques as well as his eccentric character. .. .. In the early 1970s, Perry was one of the producers whose mixing board experiments resulted in the creation of dub. In 1973, Perry built a studio in his back yard, The Black Ark, to have more control over his productions and continued to produce notable musicians such as Bob Marley & the Wailers, Junior Byles, The Heptones, and Max Romeo. With his own studio at his disposal, Perry's productions became more lavish, as the energetic producer was able to spend as much time as he wanted on the music he produced. It is important to note that virtually everything Perry recorded in The Black Ark was done using rather basic recording equipment; through sonic sleight-of-hand, Perry made it sound completely unique. Perry remained behind the mixing desk for many years, producing songs and albums that stand out as a high point in reggae history. .. .. By 1978, stress and unwanted outside influences began to take their toll: both Perry and The Black Ark quickly fell into a state of disrepair. Eventually, the studio burned to the ground. Perry has constantly insisted that he burned the Black Ark himself in a fit of rage, but it has also been said that fire could have been an accident due to faulty wiring. After the demise of the Black Ark in the early 1980s, Perry spent time in England and the United States, performing live and making records with a variety of collaborators. It was not until the late 1980s, when he began working with British producers Adrian Sherwood and Neil Fraser (who is better known as Mad Professor), that Perry's career began to get back on solid ground again. Perry also has attributed the recent resurgence of his creative muse to his deciding to quit drinking alcohol and smoking cannabis. Perry stated in an interview that he wanted to see if "it was the smoke making the music or Lee Perry making the music. I found out it was me and that I don't need to smoke." .. .. Perry now lives in Switzerland with his wife Mireille and two children. Although he celebrated his 70th birthday in 2006, he continues recording and performing to enthusiastic audiences in Europe and North America. His modern music is a far cry from his reggae days in Jamaica; many now see Perry as more of a performance artist in several respects. In 2003, Perry won a Grammy for Best Reggae Album with the album Jamaican E.T.. In 2004, Rolling Stone Magazine ranked Perry 100 on their list of the 100 Greatest Artists of All Time. More recently, he teamed up with a group of Swiss musicians and performed under the name Lee Perry and the White Belly Rats, and made a brief visit to the United States using the New York City based group Dub Is A Weapon as his backing band. Currently there are two feature length movies made about his life and work: Volker Schaner's "Vision Of Paradise" and "The Upsetter" by filmmakers Ethan Higbee and Adam Bhala Lough. .. .. In 2007, Perry surprised the music world again when he invited "king of party music" and television personality, Andrew W.K., to produce his new full-length album, "Repentance". In 2008, Mr. Perry teamed up again with Adrian Sherwood for the release of "The Mighty Upsetter." .. .. For more information about Lee Scratch Perry, read the excellent authorized biography.