The festival will happen in Tolmin (Slovenia) from 12th to 15th of August 2015. The fourth headliner will be announced soon. The Overjam Festival this year aims to make everybody happy, covering the musical tastes of the reggae lovers and at the same time to satisfy at the best the many people that bought the discounted presales.

Indeed Max Romeo will be the roots star of the festival, and he will play in Tolmin (Slovenia) on Friday 14th of August, while Capleton will have the goal to make the massive jump on the night of Thursday the 13th.  Before him, the black music burning star Hollie Cook, daughter of the legendary Sex Pistols drummer, Paul Cook. These two big names will be added to the already announced Gentleman, Mellow Mood, O.B.F., Jugglerz, Fatman HI-FI e Brother Culture, waiting for the confirmation and the announcement of the fourth headliner that will have the honor to close the mainstage of the festival on Saturday the 15th .

Another greedy news of the 2015 edition, is the possibility to easily reach the festival by private bus service connected to main low cost airports, and organized in cooperation with many travel agencies and social promotion associations. The bus lines will leave from Milan, Treviso & Venice airports (where you can fly low cost from all around Europe), Trieste, Villach (connected by train with whole Austria and Germany), Udine, Cividale and Gorizia. The prices of the complete packages festival & bus transportation will be announced on the festival website and on the official facebook fanpage in the next days. 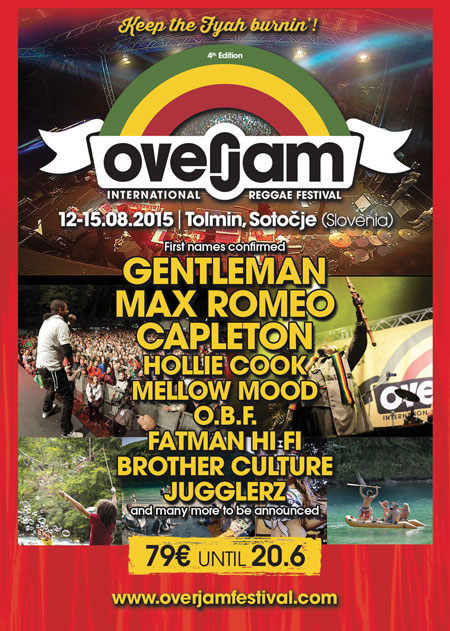